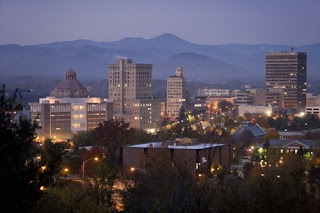 We at The WhiteGate Inn were pleased to be mentioned in the May issue of GQ magazine, which featured a full page devoted entirely to the city of Asheville. Described as an anomaly in its home state, the reporter was generous in his praise and descriptions of why Asheville has become so popular. He mentions the burgeoning restaurant scene “that could hold it’s own in San Francisco” and that locals are too modest to say this themselves, but a better slogan would be “Asheville is the new Austin, with a better view.”

After discussing the Obama’s vacation last summer at the Grove Park Inn, the article states “you’re better off staying in one of the stately B&B’s just a few blocks from downtown, like the WhiteGate Inn, with it’s lush gardens and private carriage house.”

In discussing the Asheville restaurant scene, the newly opened tapas bar Cúrate is featured. The couple who owns Cúrate worked at elBulli in Spain and their new Asheville hot spot “reflects skills picked up at the greatest restaurant kitchen in the world.” No small praise indeed!

The GQ article does discuss the Biltmore Estate and the city’s most prominent immigrant, George Vanderbilt. “Tour the sprawling gardens and soaring billiards room and you’ll get wistful for a time when trust funders knew how to waste their family fortunes in good taste.”

Our Asheville bed and breakfast is honored to be mentioned in a national magazine. We have been featured in a number of local and state magazines including Carolina Living, Our State and Carolina Gardener. Publicity of this type is always gratifying. In fact, 5 years after the WhiteGate was mentioned in the New York Times travel section, people are still finding us there and deciding to come for a visit!