The peak season for orchid bloom is upon us and luckily my greenhouse is full of blooming orchids. This is important because our annual orchid show at the NC Arboretum will be held March 27-29. I should have about 30 orchids in the WNCOS exhibit this year.

My collection has grown dramatically since moving over 300 orchids from my house on Lake Norman to the WhiteGate Inn Greenhouse in 2000. The greenhouse was one of the first additions to the WhiteGate Inn and was designed for orchids and other tropical plants. I have over 1000 orchids now but always seem to have room for another one.

concentrating on species orchids. My favorite genus is Phragmepediums and I am devoting more and more bench space to this genus. I am excited to have a Phrag. kolvachii that I acquired from HP Norton at Orchidview in bud and about to bloom for the first time. This is a rare species that was only discovered in Peru about six years ago.

I have been growing orchids for almost 22 years. My brother-in-law gave me 3 plants, I joined the NCPOS in Charlotte, and within 2 years was on the board and became interested in putting in my own exhibit in the local orchid show, which for many years was part of the Southern Spring Show.

I feel like I have come full circle this year when in mid-January I again put in an exhibit at the NCPOS Show which held their show this year for the first time at the Daniel Stowe Botanical Garden near Belmont NC. This was a beautiful venue for an orchid show and I was able to visit the new orchidarium at Stowe for the first time. It is an amazing design, particularly the 40 foot waterfall wall that was covered in orchids. I look forward to many return visits to this incredible botanical garden and orchidarium.

The next orchid show of the season in which I participated was the SCOS show, held in early February at the Riverbanks Botanical Garden in Columbia, SC. Again,this is a great venue for an orchid show.

I am excited to be participating in our 8th AOS sanctioned show at the NC Arboretum at the end of March. Over 40 members of the WNCOS help put this together every year and as much work as it is we always come away feeling gratified at how it always comes together and how much the public appreciates our efforts. Please enjoy the photographs of orchids that have been grown in the WhiteGate greenhouse and entered in orchid shows over the past few years. 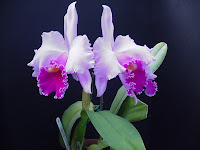 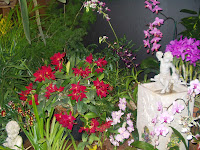 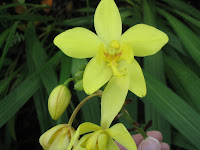 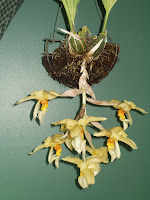